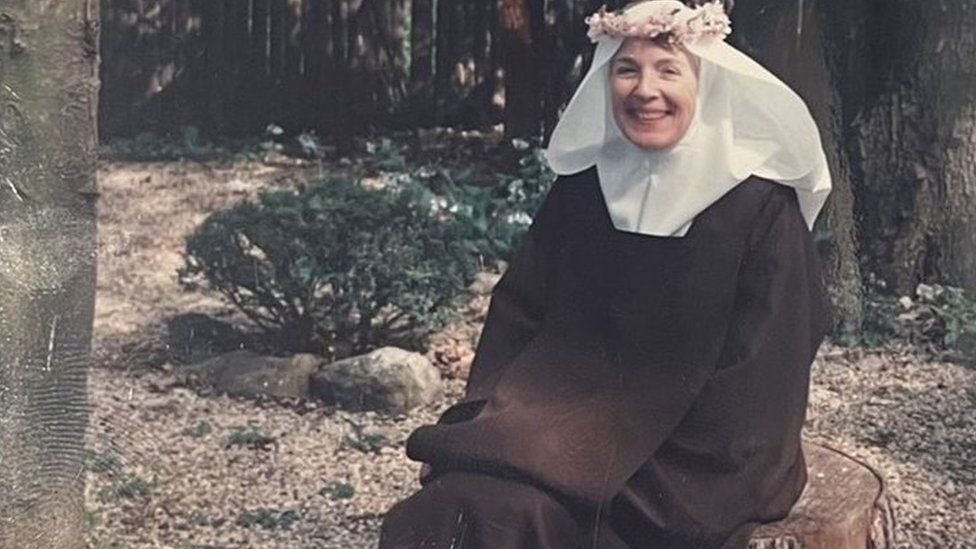 Born in 1928, Ann had dreams of becoming a nun, but she fell in love instead.

Until she dedicated herself to a life of prayer she was known as Ann Russell Miller, a wealthy San Francisco socialite married to Richard Miller, who became vice president of Pacific Gas and Electric, a utility company. who hosted lavish parties, had season tickets to the opera and was the mother of ten children.

“By age 27 she had five kids,” says her youngest son, Mark Miller, “and then she went on to have five more – a basketball team of each sex. Planned Parenthood she called it.

“She had a million and one friends. She smoked, she drank, she played cards. She became an open water diver.

“She drove so fast and recklessly that people got out of her car with a sore foot from slamming on the imaginary brake. She gave up smoking, alcohol and caffeine on the same day and somehow managed to not commit homicide as a result.”

Ann raised their family in a nine-bedroom mansion overlooking the San Francisco Bay and was known for whisking friends away on skiing holidays, Mediterranean yachts and archaeological digs.

At one time she was a member of 22 different boards and raised money for gifted college students, homeless people and the Roman Catholic Church.

Her husband died of cancer in 1984 and it was then she began the long, considered bid to join one of the strictest orders of nuns in the world.

Five years later she gave away everything she owned to join the Sisters of Our Lady of Mount Carmel in Des Plaines, Illinois.

The Carmelite nuns are a cloistered and ascetic order, living largely in silence. They do not leave the monastery, except when necessary, such as to see a doctor. The nuns only speak if it is essential, leaving more time for contemplation and prayer.

“She was an unusual kind of nun,” says Mark. “She didn’t sing very well, she was frequently late to her required duties around the convent and she threw sticks for the communal dogs which was not allowed.
“I have only seen her twice in the last 33 years since she joined the convent and when you do go to visit you can’t hug or touch. You are separated by an offset pair of double metal grilles.”

She slept on a wooden plank covered by a thin mattress in a cell and during the day she wore a coarse brown habit and sandals, a far cry from her former life filled with silk parasols, Hermes scarves and Versace shoes.

On her 61st birthday Ann threw a party for 800 guests at the Hilton Hotel in San Francisco to say farewell to her friends and family. They ate expensive seafood, listened to live orchestral music and Ann is said to have worn a flower crown and had tied a helium balloon to herself which said “here I am” so people could find her to say their goodbyes.

She told her guests she had devoted her first 30 years of life to herself, the second 30 to her children and that the last third of her life would be dedicated to God. The next day she flew to Chicago to live at the monastery as Sister Mary Joseph.

Our relationship was complicated,” says Mark. “She was born in the 20s and died in the 20s of the next century.