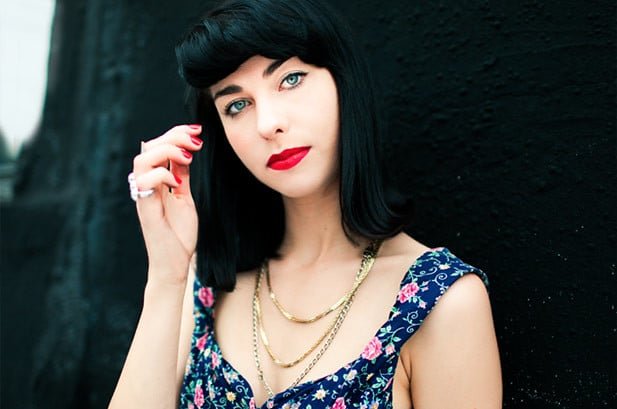 Kimbra Lee Johnson is a New Zealand singer, songwriter, record producer, actress and model who mixes pop with R&B, jazz and rock musical elements. Her musical influences range from Prince and Minnie Riperton to Björk and Jeff Buckley. Her debut album, Vows, was released in Australia in 2011. Kimbra Lee Johnson was born on 27 March 1990 and grew up in Hamilton, New Zealand. Kimbra is a daughter of an orthopedic nurse mother, Chris Johnson , and Ken Johnson, who worked as a head doctor at the University of Waikato’s student health center. At the age of 10, Kimbra began writing songs. When she was 12, her father bought her a guitar and after a few years of lessons, she was on stage, performing with her guitar tutors. Kimbra attended Hillcrest High School, competing in the national schools’ musical competition Rockquest for three years running, where she was awarded second place in 2004 at the age of 14. Kimbra made her first music video, “Smile”, for the children’s TV show What Now. Kimbra was a member of the Hillcrest High jazz choir, Scat. She recorded her first several songs on a borrowed eight-track recorder from her school.

Kimbra began singing in public, and even sang the New Zealand national anthem in 2002 in front of 27,000 people at the NPC rugby union final. 2007 was the breakthrough point for her, as she won the Juice TV award for the Best Breakthrough music video, for her song “Simply on My Lips”. Soon after, Kimbra signed a contract with Mark Richardson in his new record company Forum 5, after which she moved to live in Melbourne, Australia. Kimbra worked on her debut studio album from 2008 to 2011, and finally, in late August 2011, “Vows” came out that reached No. 14 on the Billboard 200 chart, and topped the New Zealand NZ Artists Albums Chart. The singles “Settle Down”, Cameo Lover”, “Two Way Street”, and “Good Intent” were quite popular, and the commercial success of the album increased her net worth significantly. It achieved platinum status in both Australia and New Zealand. Kimbra has cited Stevie Wonder as one of her biggest musical influences. However, regarding her personal life, Kimbra’s most intimate details such as marital status and the number of children are unknown, as she successfully manages to keep them out of the public eye.