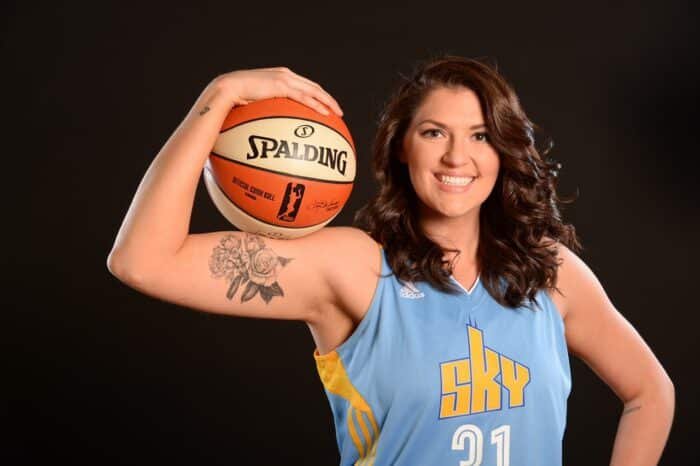 Stefanie Dolson a.k.a. Big Mama Stef, is an American professional basketball player for the Chicago Sky of the Women’s National Basketball Association (WNBA). She was drafted sixth overall in the 2014 WNBA draft. Dolson played center for the UConn women’s basketball team and won back-to-back national championships in 2013 and 2014. She won a gold medal in Women’s 3×3 basketball at the 2020 Summer Olympics.

Dolson played volleyball and basketball at Minisink Valley High School in Slate Hill, New York and was a member of the National Honor Society

In 2016, Dolson publicly came out as a member of the LGBTQ community. She spoke out on her sexuality in an interview with ESPN Magazine by saying: “Not everyone in the WNBA needs to be out, but I feel called to lead an authentic life in the open. I know who I am and I don’t care if people judge me. I am 6-5, and I dye my hair purple and experiment a lot with fashion. My motto is: If they’re going to stare, they might as well stare at something fun. There are a lot of girls who struggle being who they are. We need people who are out so that those girls know it’s OK to be themselves, regardless of stereotypes. By being open, I give them someone to look up to, and however they identify, I can inspire them to support equality and LGBT issues