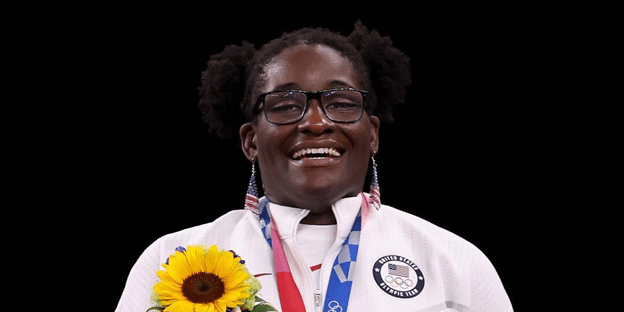 Tamyra Mensah-Stock is an African-American wrestler who competes in women’s freestyle wrestling. She won the gold medal at the Tokyo Olympics on August 3, 2021, and is the first black woman to have done so.

Tamyra was born in Chicago,Illinois, and grew up in the suburbs of Houston, Texas. Her father was a Ghanaian who lived in Ghana until the age of 30, and her mother is from Illinois. At Morton Ranch High School in Katy, Texas, her twin sister, Tarkyia, joined the wrestling team their freshman year while Tamyra pursued track and field.

She joined the wrestling team in her sophomore year, at age 15, after her sister and the wrestling coach, Mark Balser, convinced her to take part in a wrestling practice session.