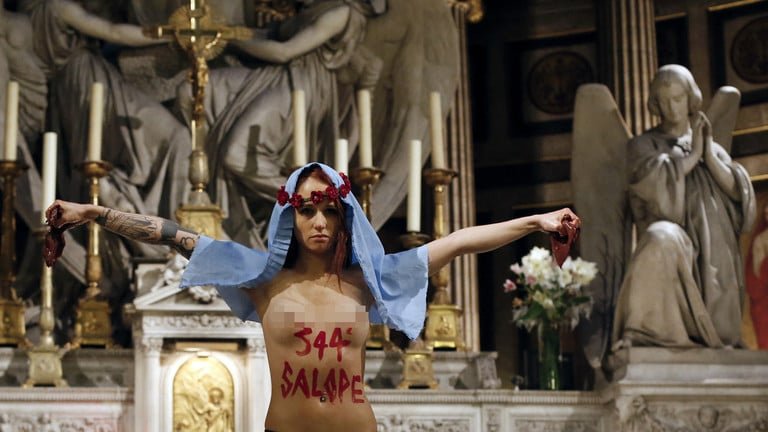 France has been ordered to pay almost €10,000 to former FEMEN member Eloise Bouton for violating her right to “freedom of expression.” The decision by the The European Court of Human Rights (ECHR) refers to the suspended prison sentence Bouton received for her 2013 topless ‘Jesus abortion’ act in the Madeleine Church in Paris.

“The Court held that France was to pay the applicant 2,000 euros (EUR) in respect of non-pecuniary damage and EUR 7,800 in costs and expenses,” the ECHR said earlier this week.

Explaining the decision, the court claimed that the Bouton’s sole aim was “to contribute to the public debate on women’s rights.”

“The purpose of the applicant’s mise en scène had been to convey, in a symbolic place of worship, a message relating to a public and societal debate on the positioning of the Catholic Church on a woman’s right to free disposal of her body, including the right to have an abortion,” the court said.

Considering that the French authorities only accused Bouton of “sexual exposure” in a public place rather than attacking religious freedom, the ECHR concluded that “the domestic courts had not struck a balance, in an appropriate manner, between the interests at stake and that the interference with the applicant’s freedom of expression.”

Bouton, who describes herself as a “writer, independent journalist and a Queer/LGBT+ feminist,” welcomed the ECHR’s decision.

“This personal fight ends with relief & happiness and the militant fight will continue as necessary,” she tweeted.

During her ‘performance’ in Madeleine, Bouton was wearing a light-blue veil and a crown of red flowers. After simulating an abortion, she stood with arms outstretched, holding bloody pieces of meat in her hands. The words “Christmas is canceled” were written on her back. Unconfirmed reports claimed that she also urinated on the steps to the altar.

FEMEN, which originated in Ukraine and which Bouton left in 2014, pushes for women’s rights through topless protests and other actions. Some of its ‘performances’ have involved simulating sex acts in mosques and churches, and have been widely condemned by religious groups.