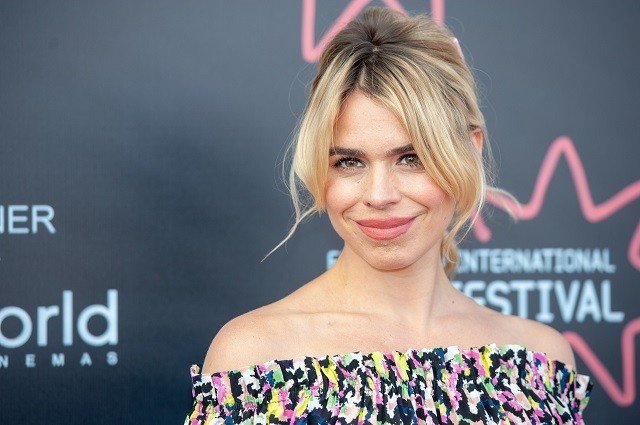 Billie Paul Piper is an English actress, filmmaker, and former singer. She first appeared as a performer in Scratchy & Co at 13. She originally became famous as a singer and released her debut single “Because We Want To” at 15, which made her the youngest female artist ever to enter at #1 on the UK Singles Chart. Her follow-up single “Girlfriend” also entered at number one. In 1998, Piper released her debut studio album, Honey to the B, which was certified platinum by the British Phonographic Industry. Following a second album, which spawned her third UK #1 single, “Day & Night”, Piper announced in 2003 that she had abandoned her music career to focus on an acting career.

Piper appeared in the BBC One sci-fi series Doctor Who in the role of Rose Tyler, companion to The Doctor as a regular between 2005 and 2006, and additionally in 2008, 2010, and 2013. Piper starred as the high-flying escort Belle de Jour in the television drama series Secret Diary of a Call Girl (2007–2011). She also starred as Brona Croft/Lily in the Showtime horror series Penny Dreadful (2014–2016) and as Karen Mars in Netflix Original series Collateral (2018) for which she was nominated for a British Academy Television Award for Best Supporting Actress. Piper co-created and starred in the Sky Atlantic series I Hate Suzie (2020–present) for which she earned a BAFTA nomination for a Best Actress in 2021. Her film roles include Things to Do Before You’re 30 (2004), Mansfield Park (2007), City of Tiny Lights (2016), and Eternal Beauty (2019). Piper has starred in five plays since 2007 and won the 2017 Laurence Olivier Award for Best Actress in a Leading Role in a Play for her performance in Yerma, described as a “generation’s best”. She went on to win a total of six Best Actress awards for that one performance, including the Olivier Award, making Piper the only actor to have won six out of an available six Best Actress awards for a single performance.

In 2019, Piper appeared alongside Sally Hawkins, Alice Lowe, and David Thewlis in Eternal Beauty, directed by Craig Roberts. In August 2020, Piper co-created and starred in the critically acclaimed Sky Atlantic series I Hate Suzie. The series was also co-created and written by Secret Diary of a Call Girl creator Lucy Prebble. Piper portrays the titular Suzie Pickles — a former child screen star whose life and career are turned upside down by a compromising phone hack. Critics noted her own experience of having been a prodigious young singer-turned-actress who becomes famous at a young age will no doubt have informed her new role as Pickles. The Guardian gave it a five-star review, describing Piper’s character as “nude, lewd and joyously off the rails” in “this scabrously funny drama”.

In March 2021, it was announced that Piper will appear in the movie adaptation of a children’s book called Catherine, Called Birdy.

Previous post How to Get Rid of Dark Circles Permanently ?