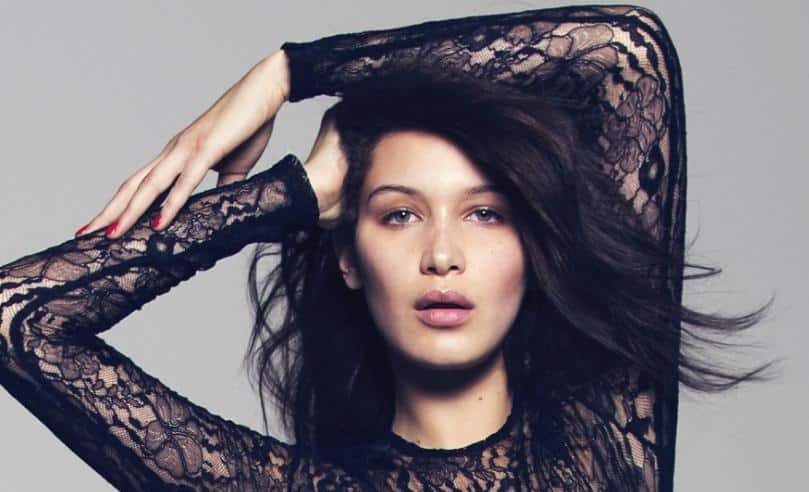 Isabella Khair Hadid also known as Bella Hadid is an American model. She also shot various magazines like Teen Vogue, Grey magazine, V magazine, and Evening Standard. She is also very active on social media. She has more than 34 million followers on his Instagram and 1.2 million followers on his Twitter account. In 2016, she was voted “Model of the Year” by industry professionals for Models.com

Isabella Khair Hadid was born on October 9, 1996 in Washington, D.C. to Palestinian Jordanian real-estate developer Mohamed Hadid and Dutch former model Yolanda Hadid. Through her father, she claims descent from Daher Al Omer, Prince of Nazareth and Sheik of Galilee. She has an older sister, Gigi, and a younger brother, Anwar, both of whom are models. She also has two older paternal half-sisters; Marielle and Alana. She and her siblings were raised on a ranch in Santa Barbara, California. The family moved to Beverly Hills after ten years. As a teenager, Hadid was an equestrian and dreamed of competing at the 2016 Summer Olympics, although she competed in equitation, which is not an Olympic discipline. She was diagnosed, along with her mother and brother, with Chronic Lyme disease in 2012. In 2014, after graduating from Malibu High School, Hadid moved to New York City to study photography at the Parsons School of Design. Before attending Parsons, she signed to IMG Models. She suspended her studies to focus on her modeling career, but has expressed an interest in returning to school once she’s done modeling to branch out into fashion photography. Hadid has also expressed an interest in acting.

Hadid’s modeling career began when she was sixteen years old with a commercial project for Flynn Skye. Hadid signed to IMG Models on August 21, 2014 and made her New York Fashion Week debut in September, walking for Desigual. Over the years, she has also shot various magazines like Teen Vogue, Grey magazine, V magazine, and Evening Standard. She also broke the record for most Vogue September 2016 covers in one year.  She also shot editorials for Vogue Paris, LOVE Magazine, V Magazine, and Dazed.  In March 2016, Hadid won “Model of the Year” at the Daily Front Row’s Fashion Los Angeles Awards. In June 2016, Hadid ranked among Models.com’s Top 50 Models. In September, she won “Model of the Year” at the GQ Men of the Year Awards in London. In December, Models.com nominated Hadid for their Reader’s Choice awards for “Model of the Year” and “Social Media Star of the Year”. She was voted “Model of the Year” by industry professionals. In March 2018, she starred on the cover of British Vogue with her sister, Gigi.

In 2021, Hadid walked for Givenchy’s Fall campaign, for Mugler’s Spring/Summer virtual campaign, and appeared in Boss x Russell Athletics’ campaign. She also walked for Jacquemus’ show, “La Montagne” during Paris Fashion Week and attracted considerable coverage at the Cannes Film Festival as well.  On September 1, 2021, Hadid became the co-founder and business partner of Kin Euphorics, a nonalcoholic adaptogenic beverage brand where she oversees the company alongside its CEO and co-founder Jen Batchelor.