Serves 4 as a side dish
If you want this salad to have a lighter, more summery feel. Halve
the amount of baby spinach and skip the wilting step.

Place couscous and cumin in a heatproof bowl. Pour over 1/2
cup boiling water, cover and allow to stand for 5 minutes.
Meanwhile, place a medium saucepan over a medium high
heat. Add two thirds of the baby spinach and cook, stirring
constantly until spinach has just wilted.

Remove from the heat and stir through olive oil, vinegar and
couscous. Season and transfer to a large salad bowl. Toss
through remaining spinach and sprinkle over almonds. 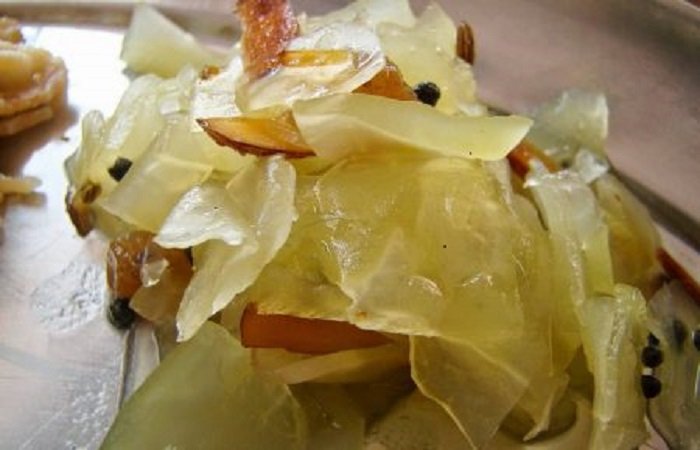 So, what is this plastic chutney? No, it’s not real plastic, it’s just a look alike. Made of raw papaya, this chutney is completely BPA and plastic free. The thin slices of raw papaya look exactly like strips of translucent plastic after cooked. A wonder from Indian cuisine.

Salt – as per taste

Method:
Boil water and salt in a pan and put the sliced papaya into them. Boil the mixture till the papaya slices are soft. When they become transparent, they are done – that’s the indication.

In separate pan boil water, add sugar and make a free-flowing sugar syrup. Strain this sugar syrup. Now put the boiled papaya slices into this and cook for 10 mins. Add roasted raisins, dates, cashews, and other dry fruits as you like. End the cooking by adding a spoon of lemon juice. This makes the papaya slices shine like plastic pieces.

India is known for its extraordinary cuisine and dishes like these just prove the same. Travel to India & experience the age old culture. 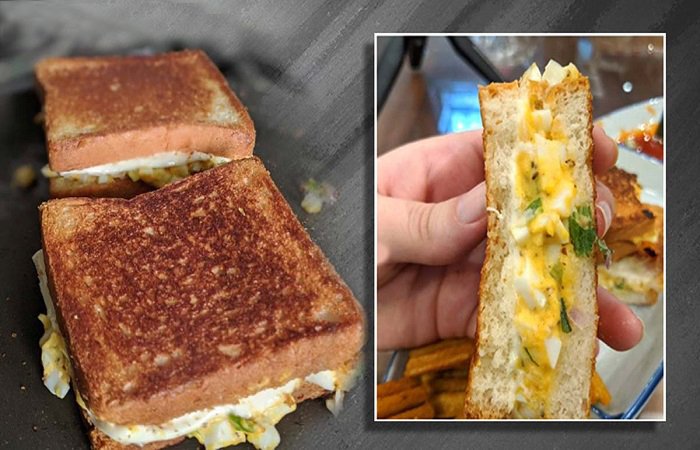 There are days when you are just not in the mood to make anything elaborate for breakfast, but still crave for something yummy and filling. Is today one such day? Worry not, we have you covered with this simple bread-based recipe which doesn’t require much effort. While on such days most of us would be happy with bread and jam, for those craving something more, here is a quick recipe from chef and author Anahita Dhondy.

Called Simple Boiled Egg Sandwich, the fuss-free recipe is one of the most delicious ways to have a tawa toasted sandwich. The best part is that you do not really need to stick to the recipe and can utilise all that you have at hand. Sounds fun, right?

Below is the recipe she shared on her Instagram. Take a look!

Simple Boiled Egg Sandwich 🥪 So many of you have made this from our live session and the others have asked for the recipe so I thought it'd be good to type it out and keep it for a lazy day. It is probably the most delicious way to eat a TAWA toasted Sandwich with really simple ingredients. I did this for a live session for @sbowindia and we had it on our menu but this is a little improvised as I didn't have some ingredients. Please do use what you have, if you have any doubts, do put them in the comments 🙌 Ingredients: 2 boiled eggs (boil it for 8 mins, once the water starts boiling. Peel and keep aside) Salt and pepper to taste You can add chopped: Spring onion, celery, bellpeppers – I only had spring onions so I used that BUT you need to add – chopped green chillies and coriander (they add loads of flavour) 1tsp of any chilli sauce 1tsp of mustard 2tsp of mayo / cheese spread (whatever you have) 4 slices of bread Butter (as much as you like) Method: 1. Seperate your egg yolks and whites 2. Chop egg whites. Keep aside. 3. Grate egg yolks, add all the chopped veggies, salt, pepper, sauces, mayo, and mix well till a nice pasty consistency. 4. Heat your tawa, add a few drops of oil and butter. Keep on a medium to low flame. 5. Butter your bread – one side inside and one side outside 6. Add your chopped egg whites into the yolk mixture. Taste it, add whatever you need. 7. Spread the mixture, add a cheese slice and close the sandwich 8. Toast it on the tawa on both sides, cut into half and serve warm! Goes best with ketchup and chips on the side! Swipe 👉 to see the video at the end! Chef tip: you can make this with chopped paneer also if you want it to be veg. Experiment with the veggies you have in your fridge. Hope you enjoyed this really easy recipe! Stay home, stay safe! #TogetherAtHome we'll keep cooking something new everyday ❤️ #quarantinecooking #boiledeggsandwich #chefathome #tips #cheftips #cookingtogether #easypeasy #easypeasy #comfortfood #yum #instafood

2 – Boiled eggs (boil them for eight minutes. Then peel and keep aside.)
Salt and pepper to taste
You can add chopped: spring onion, celery, bell peppers
Few- Green chillies, chopped
Few – Coriander, chopped
1tsp – Chilli sauce
1tsp – Mustard
2tsp – Mayo/Cheese spread (whatever you have)
4 – Slices of bread
Butter (as much as you like)

*Separate your egg yolks and whites
*Chop egg whites. Keep aside.
*Grate egg yolks. Add all the chopped veggies, salt, pepper, sauces, mayo, and mix until you get a nice consistency.
*Heat your tawa, add a few drops of oil and butter. Keep on a medium to low flame.
*Butter your bread — one side inside and one side outside.
*Add your chopped egg whites into the yolk mixture. Adjust seasoning.
*Spread the mixture on one slice, add a cheese slice and put the other bread slice on top to make a sandwich.
*Toast it on the tawa on both sides, cut into half and serve warm. 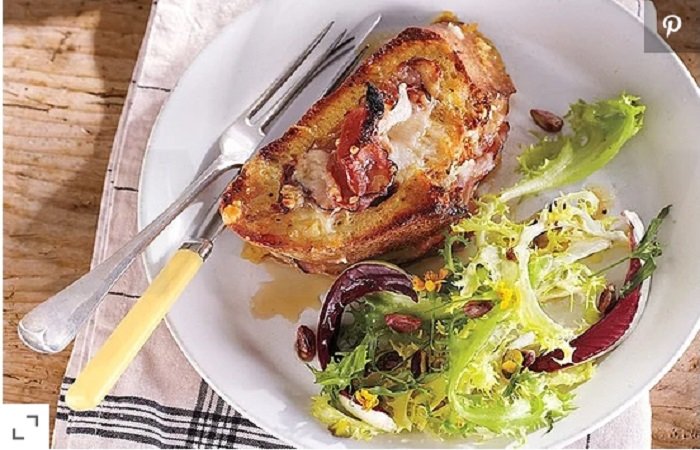 Butter bottom and sides of a 9-by-13-inch baking dish. Make a deep slit in each bread slice to create a pocket. Stuff each with 1 slice of ham, then divide cheese evenly among pockets.

Whisk together eggs and milk in a bowl until combined, and season with salt and pepper. Pour egg mixture into prepared baking dish. Add bread slices in a single layer, gently pressing into egg mixture, and let soak 15 minutes. Flip bread You can soak the bread in the egg mixture for just 30 minutes, but the French toast will be even more delicious if you let it sit overnight. and gently press again into egg mixture. Let soak 15 minutes. (If preparing the day before, refrigerate up to 12 hours, loosely covered, then let stand at room temperature 30 minutes.)

Preheat oven to 350 degrees. Top bread with remaining ham and cheese. Bake until egg mixture is set and cheese is melted, 20 to 25 minutes.

Turn oven to broil, with rack 4 to 6 inches from heat source. Broil until bread is toasted and golden brown, 1 to 2 minutes. Serve hot with maple syrup. 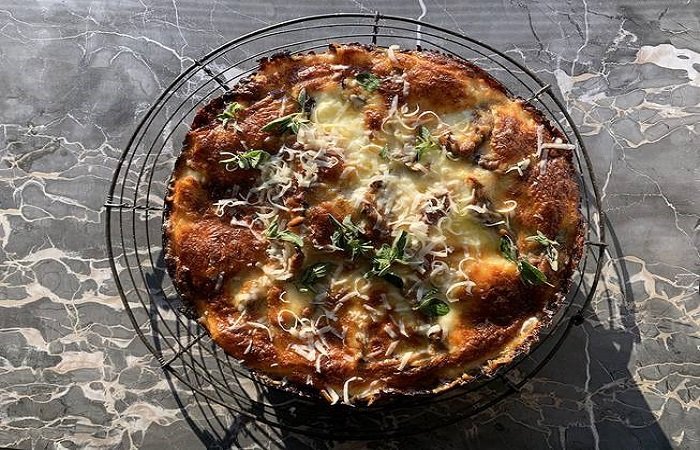 With just a few ingredients, one bowl, and a no-knead crust, anyone can make this delicious crispy pan pizza.

Every once in a while a recipe comes along that is transformative for its type; and the recipe for “Crispy Cheesy Pan Pizza” plunks itself perfectly into that category. For anyone who has ever been intimidated by making pizza at home, this recipe is for you. For anyone who can’t decide between crispy thin crust or chewy deep-dish, it is also for you. For anyone who wants a hard-to-wreck pizza that tastes sublime and requires no special skill or equipment, yep, it’s for you too!

The recipe comes courtesy of the kitchen magicians at King Arthur Flour, and is in fact their 2020 Recipe of the Year. As of this writing, the recipe has 315 reviews with an average of 4.8 out of five stars and more than 78,000 shares. And if you browse the reviews, it becomes clear just how wholeheartedly the recipe has been embraced. It’s the perfect Goldilocks pizza; it’s crispy with a cheesy bronzed crust, yet thick with an airy texture. And any recipe that asks only for simple ingredients, just one bowl, and a cast iron skillet gets high marks from team Treehugger.

I know this may sound like an ad, I promise it is not. I randomly made the recipe for my family last weekend and everyone basically freaked out over how much they loved it; and I was thrilled by its simplicity. This will definitely go into our rotation of regular favorites.

So what makes this pizza recipe so great? 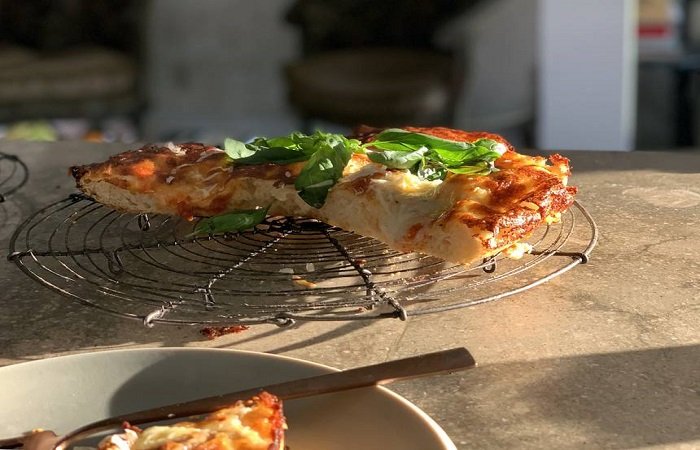 It has simple ingredients

The crust is made of flour, yeast, salt, and olive oil; the topping is cheese and a bit of sauce. The texture and flavor are so satisfying as is, you don’t need other toppings. We made two – one with just cheese and sauce, the other with sauteed shiitake mushrooms, ricotta, and truffle oil – and they were equally delicious.

Its no-knead method is brilliant

You don’t need a mixer, you can just stir it in a bowl for literally one minute. Rather than kneading, the method requires folding the dough four times, which adds air pockets that lead to its unique airy texture. It then sits in the fridge overnight to allow the flavor to develop.

It calls for a cast iron skillet

It explains the tricks for crispiness

To ensure an assertively crisp edge and crust, dollops of sauce are added after the first layer of cheese and before the second layer, and cheese is sprinkled all the way to the edge. The instructions also ask you to remove the pizza from the pan as soon as you can and place it on a rack, further prohibiting the dreaded soggy bottom.

It’s the best of all worlds

This pizza is so crispy that the thin-crust lover in our family declared it delicious. But it is also thick, yet in a delicate way, meaning that the deep-dish kids were happy too. For anyone really wanting more of a thin crust, it can be made in a larger pan. As mentioned above, it is fabulous in its simplest form, but because of its architecture it can hold up to more adventurous toppings.