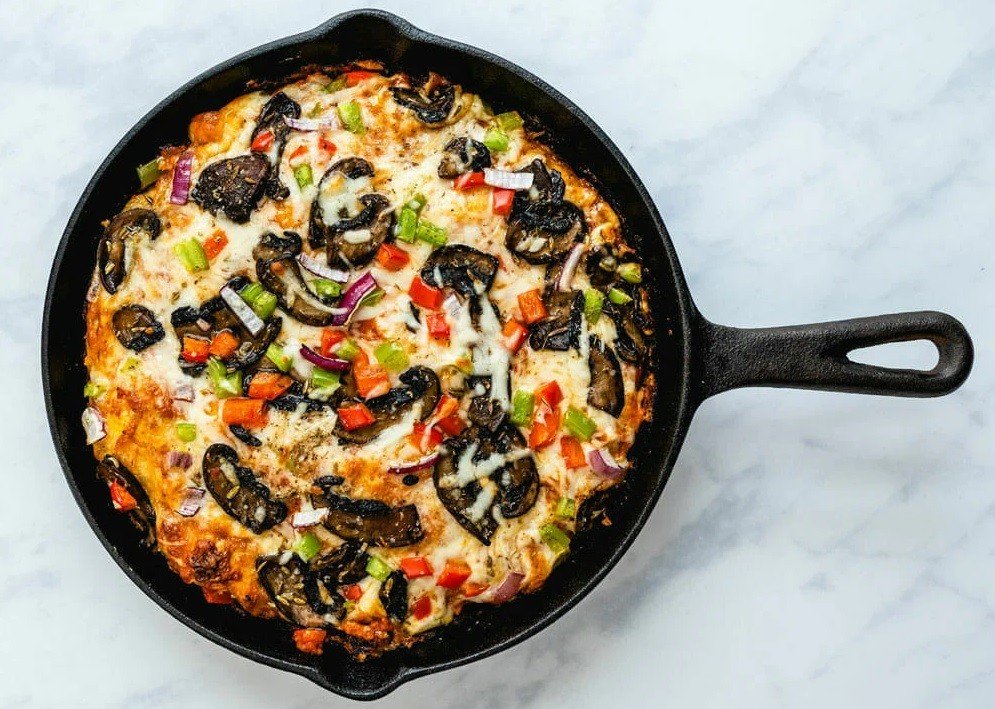 With just a few ingredients, one bowl, and a no-knead crust, anyone can make this delicious crispy pan pizza.

Every once in a while a recipe comes along that is transformative for its type; and the recipe for “Crispy Cheesy Pan Pizza” plunks itself perfectly into that category. For anyone who has ever been intimidated by making pizza at home, this recipe is for you. For anyone who can’t decide between crispy thin crust or chewy deep-dish, it is also for you. For anyone who wants a hard-to-wreck pizza that tastes sublime and requires no special skill or equipment, yep, it’s for you too!

The recipe comes courtesy of the kitchen magicians at King Arthur Flour, and is in fact their 2020 Recipe of the Year. As of this writing, the recipe has 315 reviews with an average of 4.8 out of five stars and more than 78,000 shares. And if you browse the reviews, it becomes clear just how wholeheartedly the recipe has been embraced. It’s the perfect Goldilocks pizza; it’s crispy with a cheesy bronzed crust, yet thick with an airy texture. And any recipe that asks only for simple ingredients, just one bowl, and a cast iron skillet gets high marks from team Treehugger.

I know this may sound like an ad, I promise it is not. I randomly made the recipe for my family last weekend and everyone basically freaked out over how much they loved it; and I was thrilled by its simplicity. This will definitely go into our rotation of regular favorites.

So what makes this pizza recipe so great?

It has simple ingredients

The crust is made of flour, yeast, salt, and olive oil; the topping is cheese and a bit of sauce. The texture and flavor are so satisfying as is, you don’t need other toppings. We made two – one with just cheese and sauce, the other with sauteed shiitake mushrooms, ricotta, and truffle oil – and they were equally delicious.

Its no-knead method is brilliant

You don’t need a mixer, you can just stir it in a bowl for literally one minute. Rather than kneading, the method requires folding the dough four times, which adds air pockets that lead to its unique airy texture. It then sits in the fridge overnight to allow the flavor to develop.

It calls for a cast iron skillet

It explains the tricks for crispiness

To ensure an assertively crisp edge and crust, dollops of sauce are added after the first layer of cheese and before the second layer, and cheese is sprinkled all the way to the edge. The instructions also ask you to remove the pizza from the pan as soon as you can and place it on a rack, further prohibiting the dreaded soggy bottom.

It’s the best of all worlds

This pizza is so crispy that the thin-crust lover in our family declared it delicious. But it is also thick, yet in a delicate way, meaning that the deep-dish kids were happy too. For anyone really wanting more of a thin crust, it can be made in a larger pan. As mentioned above, it is fabulous in its simplest form, but because of its architecture it can hold up to more adventurous toppings.

Next post Out of Sight but not Out of Mind- Why is it so hard to forgive an ex?